Yeah, that’s right, I’m squeezing in the final 3 weeks of the year together. December absolutely flew by in preparation for the holidays and being busy at work and socially. Below are some fitness and food highlights, with many gaps. There were quite a few mornings where I skipped a run and regretted it and others where the biting cold took away my desire entirely. My weekly mileage is still lower than where I’d like it to be by anywhere from 5-10 miles a week. I got back into ClassPass but struggled to squeeze in all 5 classes by the end of the cycle on the 20th. Foodwise, I splurged hard and gained a couple of pounds to show for it. You know, the usual post-marathon eating like you’re still training for a marathon but your mileage is 1/3 of what is was.

12/13: Mile High Run Club High 45. This was my first time not doing The Distance, but I still squeezed in over 4 miles. Different instructors have different ways of describing the faster paces (the jump between half marathon pace to 10K pace to 5K pace to flat out sprint), so that took some adjusting. Overall, I ran faster than in The Distance to compensate for the lesser mileage and felt great. I wandered around in a hungry daze after and ended up at Panera in Union Square to grab a bacon egg and cheese on an asiago bagel. ClassPass Class #2 of the cycle.

12/14: Restorative yoga. This is my favorite kind of yoga because we usually do a few sun salutations (maybe) but then hold poses like pigeon for longer, then end in an extended savasana. Works for me. ClassPass Class #3.

12/16: PureBYK at BYKlyn, which I hadn’t been to since before marathon training began. They added monitors to measure your RPMs and caloric burn, which is a nice addition. I’m excited to get back here more often. ClassPass Class #4.

12/17: I was planning to race the NYC Runs Cocoa Classic 10K on Roosevelt Island, but it was canceled due to snow. I was shooting for a PR, so I was bummed but also somewhat relieved. The snow turned to cold rain with a strong wind by 9am and I definitely wouldn’t have wanted to run in that (or have the volunteers and race staff stand around in it). They gave us a discount on future races, but no 10Ks that immediately appeal to me.

The good news is that I went back to Emily (3rd time in 2 months) and tried two new-to-me pizzas.

12/18: Cookie baking extravaganza! I made Funfetti cookies then took a stab at my childhood gingerbread cookie recipe (my Mom copied it down from a neighbor). Thanks to my trusty stand mixer (thanks, Carla!), the dough turned out perfect. Then my friends helped cut them into mitten, snowmen, and the letter H shapes.

12/19: My first PureBarre class in 4 months and my 5th ClassPass of this cycle, which I barely squeezed in. Needless to say, I was shaking during a lot of the seat work. Then my abs were sore for 3 days afterward. This was a much-needed welcome back to the barre.

12/20: Soft Swerve for purple ube ice cream with mochi and toasted coconut in a black chocolate cone. Yum. They can do a vanilla swirl with the ube and also make matcha and black sesame flavors that can be swirled together (similar to Taiyaki). I loved the crunchiness of the toasted coconut so much, plus they spooned some into the bottom of the cone before adding the ice cream.

12/23: I had off work and felt recovered enough from speedwork, so I did a late morning outer loop of Prospect Park plus the to and from was 5.7 miles total. I mistakenly thought doing the outer loop would add on more mileage and that I would hit 6 even, but I was very wrong. I didn’t look at my watch for the first 3 miles and turns out I was taking them a little too fast.

12/27: 4 miles in Richmond around Belle Isle. I tried a couple new-to-me trail sections that were smaller or steeper. It was 60 degrees when I started (hello, shorts!) then it sprinkled/drizzled for the last 2 miles. There were lots of families with kids and dogs out, plus a few other runners. Major positive splits here! I’m planning to run more along the river next time I’m back in Richmond, especially in preparation for the Richmond Half (fall 2017 races still TBD but 90% sure that one is my goal race).

Then I ate super local oysters. 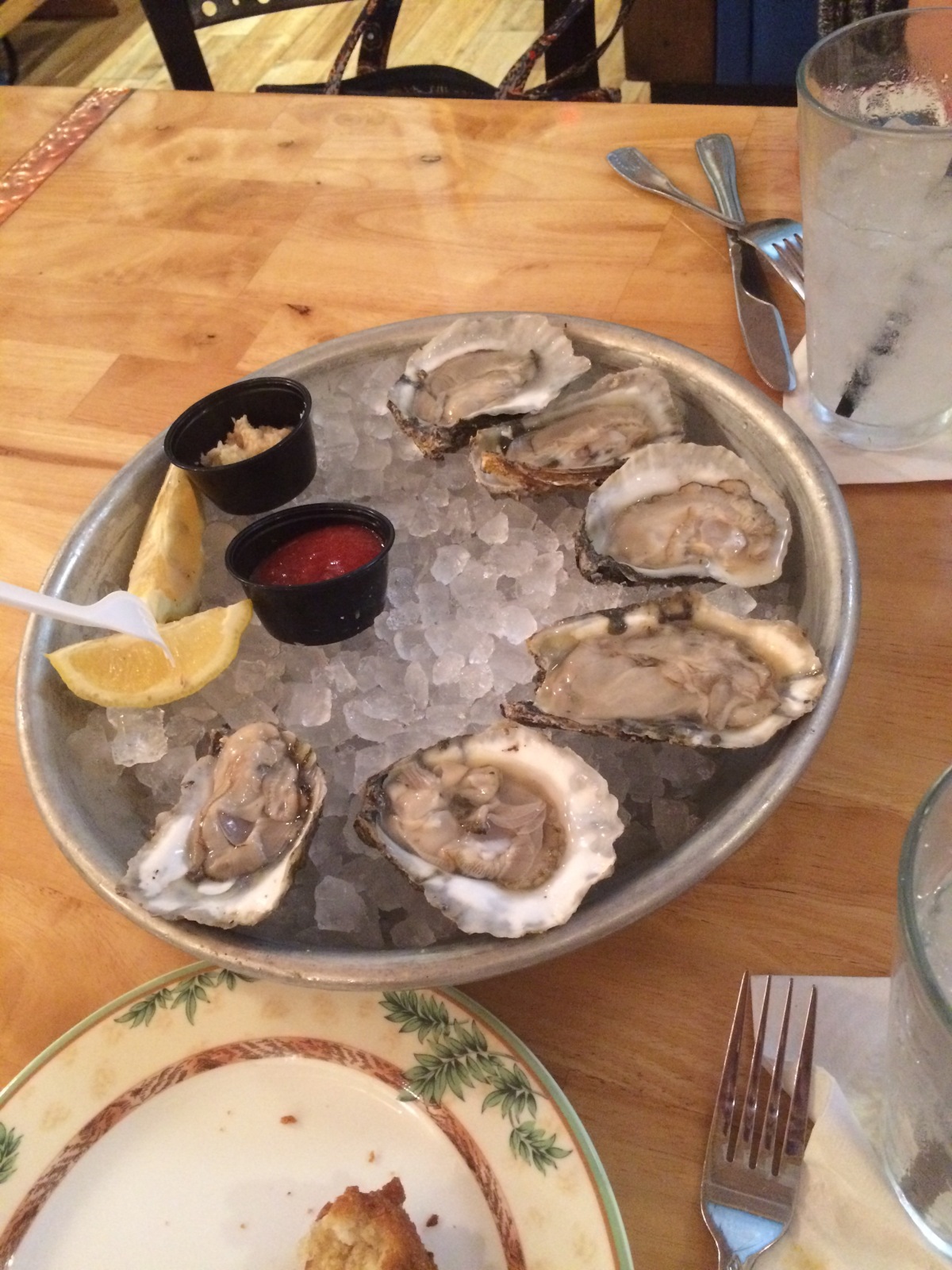 12/31: 5.5 miles along Brooklyn Bridge Park, not looking at my watch. Which of course means I was going too fast. 1.5 miles of this are downhill, then BBP is pretty flat, then of course one must go uphill to return anywhere out of DUMBO. But by the 4th mile, I had an endorphin spree and was feeling great.

1/1/17: 3 miles on the treadmill at the gym watching football, then strength and core work. I skipped a morning race in the park due to a late New Year’s Eve festivities, so I’m really glad I got a run in to kick off 2017.