Tuesday: 7/26 Ugh, overslept/hit snooze for 6am marathon training again. After work, I did 3 x 800s on a treadmill at the rock climbing gym with a half mile warmup and recovery jogs in between. I was pressed for time because of my 6:30pm belay class but glad I got in some speedwork. Less than 3 miles overall, though.

Wednesday 7/27: 5.2 miles of a park loop in the morning. I only had 2 ShotBlocks for breakfast instead of my usual frozen waffle with almond butter (ok, cookie butter) so I was struggling a little. I did 5.2 to compensate for Tuesday’s 2.8 miles.

At night, I went to the rock climbing gym and climbed with friends for a couple hours. I tried a 5.6 and 5.6+ route and was pretty sore the next day.

Thursday 7/28: I planned to run commute to work, but ended up run commuting home from work. I took Google’s recommended route home from a bar in Long Island City (after drinking just water and eating only cake). It went along the BQE for a while as well as the Orthodox South Williamsburg area and there were a lot of long lights, so I will try a more pedestrian-friendly route next time. I did get a feel for the Pulaski Bridge, which is part of the NYC Marathon route. 6.3 miles total and I ended it at Bklyn Larder to buy fondue provisions for a work lunch the next day.
Friday 7/29: Rest day. Ate a ton of delicious foods at work because we had an international food potluck. Went out at night with coworkers and ‘carb loaded’ with ddukboki and budae jigae at Pocha 32 (along with some watermelon soju). Then wisely drank lots of water at the bar. 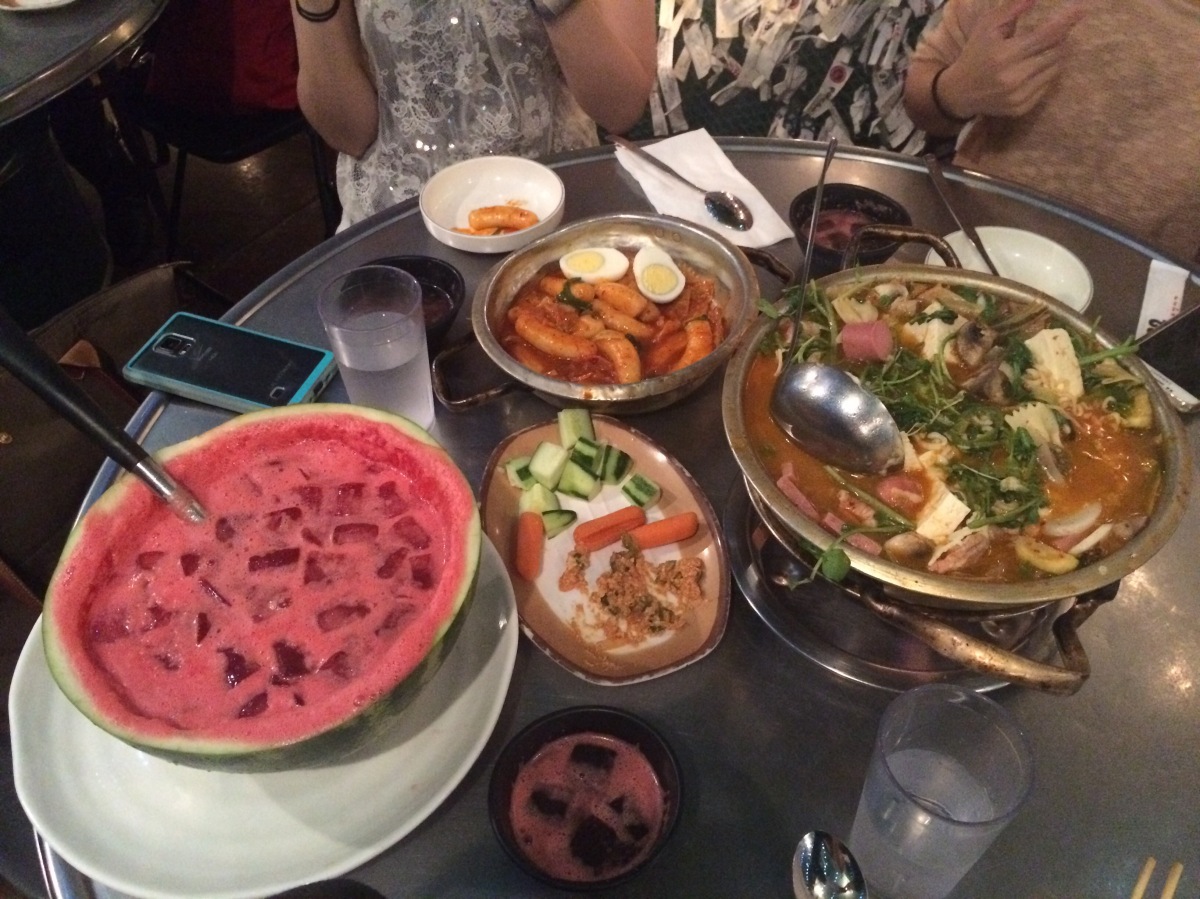 Saturday 7/30: NYRR Teamp Champs Race! Virtual Trainer suggested 7 total miles, so a mile each of warmup and cooldown before and after the 5-mile race, but I didn’t have time for even a half mile warmup. The womens’ race began at 7:30am this year (moved up an hour because of heat), so I knew I would have to do 2 miles after.

I originally had loftier time goals for this race (sub-9 or close for every mile) but my current conditioning plus the humidity led me to believe I should adjust my goals toward something more reasonable. I asked a few pals what their pacing plan was and latched onto a teammate’s who was trying for 9:15ish then dropping for the last 2 miles. We ran 4.8 miles of the race together and her positivity was so helpful during it. Well, we took the first mile a little too quick and the hills on the next 3 were not great.

I got confused by the last 200-400 meters of the race and accidentally hit stop too early on my Garmin, then restarted. But my official race time was 46:51, so that part is right.

I ended up with 2.3 after because I got confused on the bridal path and around the reservoir. I expect to hit up Central Park for my long runs more soon, including the dreaded 18-mile tune-up in mid-September.

Sunday: Quick 1.2 mile shakeout run to Bagel Pub, where I got an everything bagel (toasted) with bacon scallion cream cheese and a peanut banana smoothie.

Total: 22.8 miles out of a recommended (by NYRR Virtual Trainer) 23 miles. So close! This was my highest mileage week ever, but they will of course continue to increase.

I had a lovely draft started of all the activities I did in my 17th week out, but then life happened. And the workouts didn’t. I think this was hopefully one of my last gasps of mind-body disconnect about what I’m heading toward. It’s time to ratchet up the discipline and willpower and mind-over-matter mantras. I just purchased the NYRR Virtual Trainer and it gave me a very realistic time based on my race performances this spring as well as my current fitness, so I’m planning to log my runs and workouts into there, with some additional structure from Hal Higdon’s Novice 2 and my running club’s weekly Marathon Training Group’s speed workouts.

In anticipation of all this mileage and realizing that I only took 5 classes in my last billing cycle, I’m downgrading my ClassPass membership from the 10 classes a month Core to the 5 classes a month Base membership. I’m hoping this will assuage my guilt about rarely hitting 10/month but still allow me to cross-train with spin and get stronger with barre. I also am going to try and take some tennis clinics and use it for bouldering/rock climbing wall time.

Saturday 7/9: Short “long” run with my friend Maya for 5 conversational miles including a park loop. This felt great! I dropped her off at a rock climbing gym then dealt with my hangover on the couch.

Sunday 7/10: I had a packed day of apricot Cronuts at Dominique Ansel (along with Elle of A Fast Paced Life), a Reuben at David’s Pastrami House, then the Smith St. Bastille Day celebration. I was hoping to eke out another run but my hamstrings were a little sore and I was so busy eating and cheering for France in the EuroCup final. I foam rolled at home. 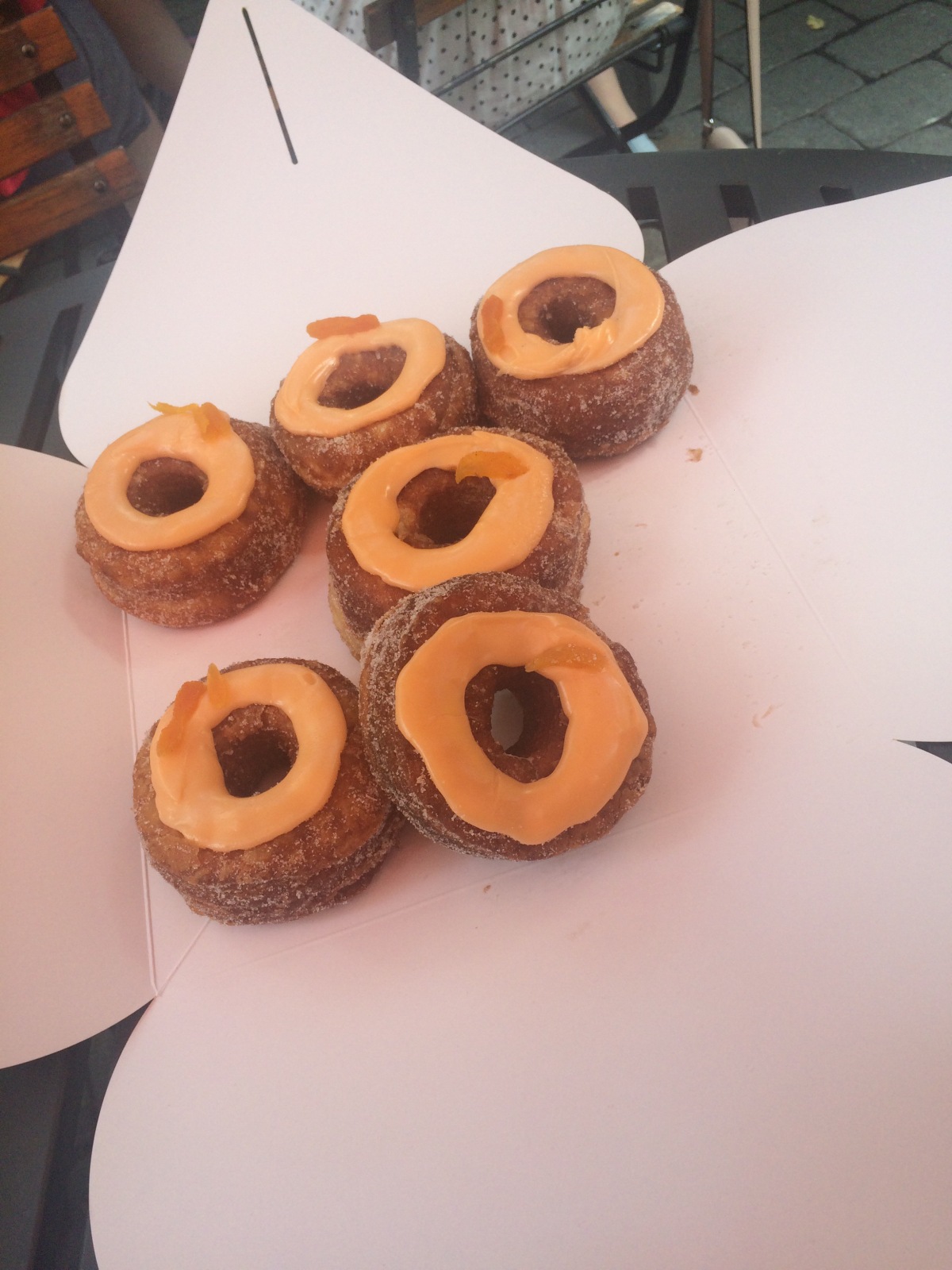 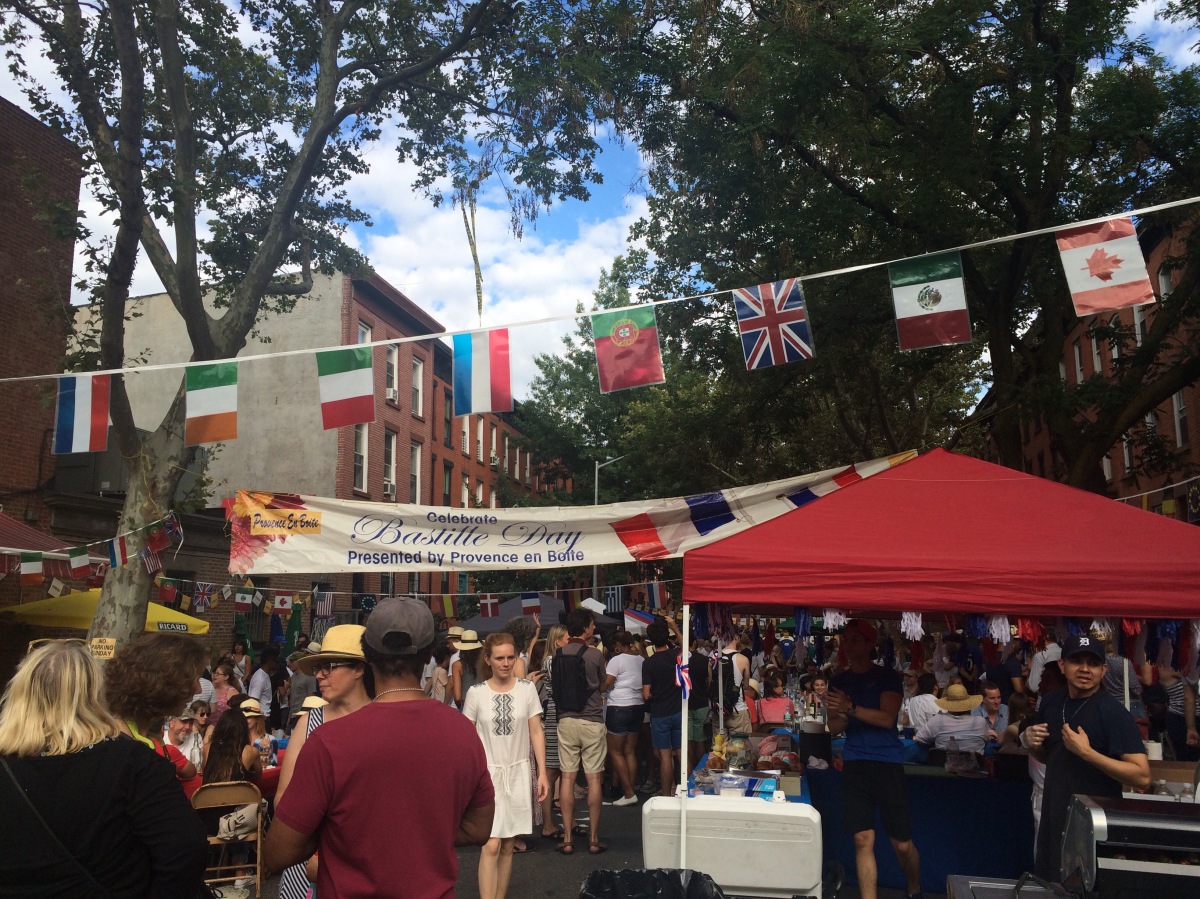 Monday 7/11: PureBarre class before work. I couldn’t tell if it felt harder (and I got sweatier) because I didn’t do barre last week or because it was a slightly modified warmup that used weights in parts. I’m pretty strong at the planking now but tricep-focused push-ups are still so tough.

Tuesday 7/12: I smartly adjusted my alarm to not get up at 5:20am for 6am speed work with my running group (after going out for drinks and Mexican the night before). Unfortunately, I outsmarted myself by sleeping past my next round of alarms at 6:20am and missed a morning run altogether. But then I went on the best Yelp event of the year; the birthday cruise.

So according to Strava and NYRR, Mondays are the start of the training week. I mentally consider it to be Sundays (is that a holdover from MapMyRun?), so here’s to some thought shift.

Sunday 7/17: I ran 3.5 miles while at home in VA around 9am, which meant that it was 80 out and 85% humidity (with a dew point in the 60’s). Needless to say, this was disgusting. I also ran it on an empty stomach, which I don’t usually do. The good news is that I tested out my SuperGoop sunscreen and it survived the sweat test. Then on Monday, it was back to NYC for my first real week of training.